skip to main | skip to sidebar

The media plays such a huge role in developing racist and cultural supremacist thoughts and it is sad when people spout out garbage and don't even realize what they are saying.  So I called this dude a racist.... yeah you know how that went over. Anyway I got hip to this article from one of my favorite blogs Africa is a Country.....


If the media covered America the way we cover Africa, here's what we would know of the United States over the last decade. That in 2000 there were fiercely disputed elections in which the presidency was seized by the candidate who won fewer votes than his rival. That a year later, one of the country's major cities was rocked by a devastating terror attack, costing thousands of lives. And that in 2005 another key city was submerged in record floods, destroying homes and leaving a thousand dead after the dominant tribe left the minority tribe to their fate. Surely we would speak of America as the dark continent, cursed to face constant suffering.

Read the rest of the article HERE or the original Harker essay HERE
Posted by the uncultured one at 4:02 PM 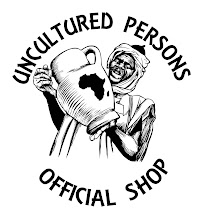 the uncultured one
Bred in Africa but buttered in the United States. Lover of all things African (well 90% of it anyway). Technically this is suppose to be a web log about the goings on at Uncultured Persons, but since blogging is such a self-indulgent medium and my interest run the gambit (plus only my family is probably going to read this anyway), I will post whatever. Let the self indulgence begin.